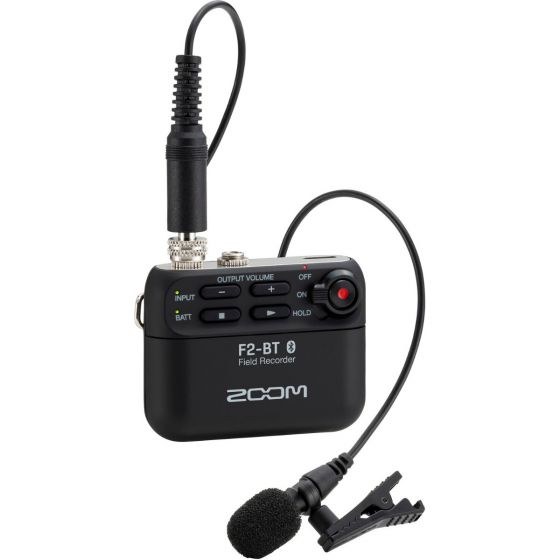 Forget about clipping, forget about gain, and forget about hassle; just power on the Zoom F2-BT ultracompact portable field recorder and press record to capture clear, distortion-free dialog in an instant for your next video shoot, podcast, vlog, or interview. Plus, it empowers users with app-based control and wireless timecode synchronization in addition to everything the standard F2 model has to offer.
Thanks to its 32-bit float technology, the F2-BT handles the softest and loudest sounds you can throw at it while avoiding distortion, maintaining low-noise performance, and freeing you from the responsibility of adjusting gain. Recordings ruined by clipped converters and poorly set preamps are things of the past. You don't even have to worry about unintentionally interrupting the F2-BT because a simple flick of the Hold switch will keep it recording no matter what button you press.

Whereas other F-Series recorders such as the F4, F6, and F8n are centered around an audio bag–ready form factor for location sound recordists, the F2-BT is tailored for belt-mount and pocket-friendly placement directly on the subject. Even the included lavalier microphone, with its low-profile design and locking connector, is optimized for reliable and visually discreet operation that won't distract the wearer or the videographer. With a headphone output and onboard transport controls, the F2-BT also allows actors to listen back to recordings to critique their own performances.

From the refreshingly simple one-touch controls to the long battery life and multiple powering options, the F2-BT is properly equipped to serve you, regardless of your audio background. Whether you need long-duration recording for a podcast, professional audio capture for an interview, a rock-solid system for weddings, or a space-saving setup for vlogs, the F2-BT is ready to capture your crucial audio at any location.

The F2-BT's operational simplicity ensures that it will never get in the way of your workflow, be it simple, complex, or always changing, so you can feel confident using it as your main recorder or as a backup unit for added safety. Take advantage of convenient remote control functions—record start/stop, low-cut filtering, output volume, battery display, and more—from your mobile device through the free Zoom F2 Control app. After the shoot, transfer your files to a computer via USB, then use the supplied Steinberg WaveLab Cast software to edit, enhance, mix, and export your audio for the world to hear.